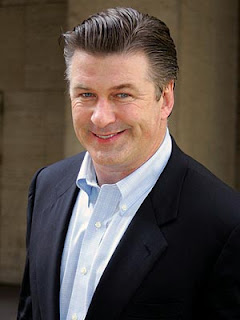 Yes, Alec Baldwin -- the Alec Baldwin -- is my cousin. I don't think he realizes it, though, because he never calls or invites me over for dinner. Of course, Daniel Baldwin, William Baldwin, and Stephen Baldwin are also my cousins. 11th cousins once removed, to be specific. I know, that's not exactly a close family tie. But it was, in its own way, one of the early landmark discoveries in my genealogical journey.
Alec was the first famous person to whom I found out I'm related. Sure, I understand that we're all part of the greater human family and we're all descendents of Adam and Eve, so anyone reading this is a cousin of one sort or another. But Alec was the first celebrity whose relationship I could actually trace genealogically. We are 11th cousins once removed because the most recent common ancestors we share were Richard Baldwin I (1503 - 1552) and Ellen Pooke (1507 - 1565). Richard and Ellen were my 12th great-grandparents and the Baldwin brothers' 11th great-grandparents, hence the "once removed" in our relationship. I guess that qualifies as a little more than six degrees of separation, but I still found it be be an intriguing discovery.
As I wrote in one of my earliest postings, I had long been told that I was descended from Dr. Edward Jenner, the discoverer of smallpox vaccine. As a child, the idea of being descended from someone really famous seemed especially cool to me. Well before I discovered the Baldwin connection, I had disproven the link to Dr. Edward Jenner. Dr. Jenner lived from 1749 to 1823 in Gloucestershire, England. I had discovered conclusive evidence that our branch of the Jenner family had arrived in America before 1700, so we couldn't possibly be his descendents, and at first that had been a bit of a letdown.
So perhaps it was a form of recompense that it is through the Jenner line that we have a common ancestor with the famous Baldwin brothers. Here's the line: me >> John A. Pellman >> Vivian Grace (Jenner) Pellman >> Almond Lewis Jenner >> Moses German Jenner >> Moses Johnson Jenner >> Timothy Jenner >> Stephen Jenner >> Hannah (Parmelee) Jenner >> Elizabeth (Baldwin) Parmelee >> Nathaniel Baldwin II >> Nathaniel Baldwin I >> Richard Baldwin III >> Richard Baldwin II >> Richard Baldwin I. 14 generations spanning a period of 350 years!
The discovery affected me in several ways. First, it personalized the fact that each of us is related -- and more closely than we might imagine -- to the people around us. For all I know, my next-door neighbor might be a cousin, too! Secondly, it aroused my curiosity about other surnames in my family tree and the possibility of relationships to other famous people -- Phelps (Michael?), Harding (Warren?), Burr (Raymond? Aaron?), etc. And finally, having traced one branch of our family tree back to 1503, I began to appreciate the fact that my ancestors had not merely witnessed history; they had helped shape history!
As I discovered a few months later, the Baldwin brothers were only the beginning. And, as famous as they are today, I would soon learn that I was descended from people of even greater fame and importance in the pageant of human history!
Posted by Len at 1:07 AM