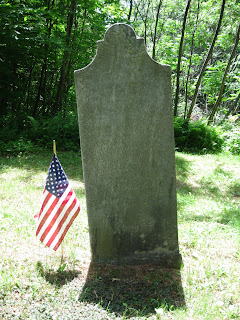 As I write this entry it is July 4th, 2009. I just finished celebrating the day with my daughter, elder son, daughter-in-law, and grandson. We had a lovely time, although little of our time together was spent in true reflection on the significance of this day. So it is fitting that this would be the day I post a tribute to a true American hero: my great-great-great-great-great-grandfather, Stephen Jenner.

Step back in time with me to July 7, 1777. It has been just over a year since the signing of the Declaration of Independence. Although the colonies are at war with England, it is a special day in the Jenner household. It is Timothy Jenner's 2nd birthday, but from the sound of it you would think it was the 4th of July. Pops, cracks, and booms have echoed through the little town of Pittsford, Vermont all day. But it's no celebration -- not for the 4th of July or little Timothy's birthday. The fireworks-like sounds are the sounds of real musket and cannon fire reverberating from the town of Hubbardton, Vermont, about 20 miles east of Pittsford. Late in the day exhausted colonists fleeing from Hubbardton brought the news to Pittsford: British forces under the command of Gen. Simon Fraser caught up with retreating colonial forces following their defeat at Fort Ticonderoga at the outskirts of Hubbardton. In the ensuing battle, the entire town was razed, killing some 300 men, women, and children. And now the British were headed toward Pittsford!
Upon receiving the news the townspeople went quickly to work, loading whatever possessions they could manage onto any available conveyance -- mostly horses and a few carts and wagons -- then burying everything they could not carry so that it could not be used by the British. After hours of hard labor, late in the night, a weary 28-year-old husband and father, Stephen Jenner, helped his wife, Mary -- pregnant with their second son, Asa -- onto their only horse, placed a sleeping Timothy (my great-great-great-great-grandfather) in her arms, and led them as quietly as possible out of town under the cover of darkness. I can only imagine how they must have prayed that no British scouts were watching the roads out of Pittsford that night!
Through the night, Stephen led his young family away from the advancing British toward the nearest place he hoped they would find refuge: Mary's birthplace, Stevenstown, Massachusetts (now Salisbury, NH). It was at least a 100 mile journey on foot, and they stopped to rest as seldom as possible since danger could be lurking all around them. They made it safely to Stevenstown. Asa was born in December, 1777 and the family probably remained in Stevenstown until he was at least a year old before returning to Pittsford.
In March, 1780 the British forces were again threatening the area. On March 23rd, the alarm was given and every able-bodied citizen took up arms to defend the town. Stephen Jenner grabbed his musket, shot, and powder and reported for duty in the company commanded by his neighbor and friend, Capt. Benjamin Cooley, in Col. Ebenezer Allen's Vermont Militia. The company patroled the area for five days, then returned without having encountered British forces.
As far as we can determine, Private Stephen Jenner never fired a shot in the American Revolution, but he is still an American hero because of his personal hardship and sacrifice for the cause of American independence and his willingness to risk his life in the service of that cause. Last month, my daughter and I visited the town of Pittsford and found the grave of Stephen Jenner. His headstone (pictured above) bears this inscription: "He was born and bred in Woodbury, CT. At 23 years of his age he came to this town and established his home for life. At 25 years of age he was married to Mary Kirkham of Stevenstown, NY whom he left a widow, he also left 6 sons and 4 daughters. At 33 he became a Baptist in which faith he lived and ever supported the general character of an honest Man." I would be honored if my descendants would write the equivalent of me!
When my daughter located Stephen Jenner's grave, I was surprised to see that someone had recently placed an American flag at his headstone. As I stood looking at his grave, I teared up at the thought that 200 years after his death someone still cared enough to accord him this honor. We were almost certain there were no Jenner descendants in the area who would have done so. After several inquiries, we finally learned that the local American Legion post maintains a roster of all war veterans buried in Pittsford and that every Memorial Day a local Boy Scout troop places the flags at their graves in honor of their service. I am deeply grateful to both organizations for honoring all of these American heroes!
Posted by Len at 7:26 PM