My 33rd great-grandfather was personally responsible for creating one of the great Christmas legends and traditions -- a legend that has been passed down for over 1,000 years and commemorated in the popular Christmas carol, "Good King Wenceslas" since about 1850. It is likely that no one today would know the name and legend of Good King Wenceslas had it not been for the efforts of my 33rd great-grandfather, Duke Boleslav I z Czechy of Bohemia.

You see, "King" Wenceslas was never actually a king. His name was Vaclav z Czechy and he was merely a duke. And even his claim to that title was not entirely legitimate. In order to seize control of the Duchy of Bohemia, he had his own mother, who had been serving as regent following the death of his father, exiled. After usurping control of Bohemia, Vaclav then entered into an alliance with the Slavs and Magyars that resulted in Bohemia being invaded by -- and becoming a vassal state of -- the Saxons and Bavarians into whose lands the Slavs and Magyars had been encroaching and raiding for centuries.
So, to restore the independence of his beloved homeland, Boleslav invited his older brother Vaclav to the feast of Saints Cosmas and Damian at the church in Stara Boleslav on 28 September 935. While Vaclav was enroute to the feast, three of Boleslav's retainers ambushed and murdered him, so Boleslav was elevated to Duke of Bohemia. Almost immediately, he reversed the policy of support for the Slavs and Magyars and began fighting for independence from Bavaria and Saxony. He expanded Bohemian territories by crushing the Magyar army, and arranged for his daughter to marry the Duke of Poland to strengthen Bohemia against continued attempts at domination by Bavaria and Saxony. For all of his patriotic efforts, however, my 33rd great-grandfather was given the epithet, "Boleslav Ukrutny" ("Boleslaus the Cruel").

Adding further insult, Vaclav was cannonized as a saint shortly after his death and was posthumously declared "king" by Emperor Otto "the Great" to whom he had been a loyal vassal. To justify this outrage, a fictional account was created of Vaclav's piety and generosity in which he is said to have walked a league (about three miles) barefoot through the snow to bring food and firewood to a destitute peasant on whom he had taken pity. This baseless legend has persisted for over 1,000 years. To heap further abuse on the memory of Duke Boleslav, Vaclav is considered the patron saint of the Czech Republic and the Czech people.
So this Christmas, when you hear carolers cheerfully extolling the virtues of "Good King Wenceslas" just remember that you have the courage and patriotism of my 33rd great-grandfather, "Cruel" Duke Boleslav, to thank for the merriment that charlatan's song brings to your heart!
Posted by Len at 1:50 PM No comments: 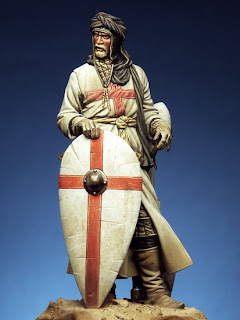 "Branded, cursed with a coward's shame


What will you do if you're branded?


Will you fight for your name?"


Ivo de Grandmesnil was one of my 26th great-grandfathers. He fought in the First Crusade in the army of Robert II "Curthose", Duke of Normandie (my 27th great-grand uncle and son of my 28th great-grandfather, Guillaume "le Conquerant"). After distinguishing himself several times in battle, he was selected for a special mission at the Siege of Antioch. Together with his uncles, Guillaume and Aubrey de Grandmesnil and Stephen II, Comte de Blois (father of future King of England, Stephen), and several other knights Ivo rappelled down the walls of Antioch under cover of night carrying treasure, maps, and architectural drawings that the Crusaders could not allow to fall into enemy hands if the city was lost to the Seljuk Turks. Like modern-day covert operatives, the group had to make their way on foot -- and chiefly by stealth, as they were vastly outnumbered in the surrounding countryside -- to the port of St. Simeon, where they were met and assisted by the Knights Hospitaller and spirited off to France by ship.

Eventually, they made their way to the city of Chartres, where they turned over their treasures to the Church for safe-keeping. Among the documents they bore were building designs that were later used in the reconstruction of Glastonbury Abbey, Winchester Cathedral, Salisbury Cathedral, Amiens Cathedral, and Chartres Cathedral, as well as many lesser-known Norman Gothic structures of the 12th through 15th centuries.

Because their mission had been carried out in utter secrecy, the entire group were derided as cowards for "fleeing" the Siege of Antioch and publicly scorned by the Pope. Although he was made Sheriff of Leicester upon his father's death in 1098, Ivo's reputation as a knight was severely damaged and he enjoyed little success. He and Stephen de Blois sought the counsel of their cousin, Hugh, Comte de Beaumont, who arranged for them to join the Crusade of 1101 in hopes that their reputations for bravery and adherence to duty could be restored. Both were killed in battle in 1102.

In 1103, another cousin of theirs, Hugues de Payens, gathered eight other knights -- most or all of them also relatives -- and formed a group to protect pilgrims to the Holy Land that would eventually be formalized as the the Knights Templar.

No records have survived that give the full reasons for the founding of the Knights Templar, but I would like to think that among them was the desire of Hugues de Payens to ensure that his cousins' deaths while trying to restore their unjustly sullied reputations had not been in vain.
Posted by Len at 2:58 PM No comments: