A Tale of Two Samuels 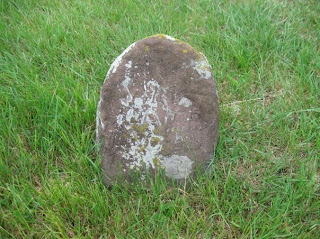 In my July 2, 2009 blog entitled "A Lamp Unto My Feet" I described how my grandmother's Jenner family Bible has led me to a number of wonderful genealogical discoveries in the past couple of years. It has also introduced me to several mysteries -- mysteries that have been both fascinating and frustrating to attempt to solve. The first of these great mysteries is the one I now call "A Tale of Two Samuels." It led us -- literally -- to the grave (pictured above) in Woodbury, Connecticut of Samuel Jenner, born circa 1650, died August 17, 1738.

In the family history section of my grandmother's Bible I found the following notation following the recorded birth information for my 5th-great-grandfather, Stephen Jenner: "Stephen was the son of Samuel and his father Samuel was born on the pasage [sic] to America." Reading this, we first believed that Samuel Jenner, father of Stephen Jenner, was our immigrant Jenner ancestor -- and he had actually been born while on the voyage to America! How cool was that?! But our excitement soon turned to befuddlement as we sought more information about Samuel Jenner.

A few hours of searching on Google and Ancestry.com soon provided a perplexing array of conflicting information:


Over a period of weeks, my daughter and I sifted through a mindboggling collection of contradictory accounts. We found documentation of no less than five "Hannah Jenners" who might have been the wife of Samuel, with birthdates ranging from 1666 to 1732. We also uncovered five Samuel Jenners, but only three with plausible birthdates: 1650, 1669, and 1703. Those with birthdates 1739 or later simply couldn't have been the father of Stephen Jenner, who was born in 1749. Some of this information seemed highly authoritative, backed by the genealogical expertise of the Church of Latter-Day Saints no less, but most of it was based on no more than what we ourselves had: family folklore.

The process was immensely frustrating! I was frittering away night after night after night, often chasing a lead through the nightmarish labyrinth of the Internet for hours, only to reach another dead end -- and ultimately getting nowhere! Many nights I felt like Edgar Allan Poe, crying out in my despair, "Oh, the 'Net, 'Net, 'Net, what a torment has me beset!" instead of "Oh, the bells, bells, bells, what a tale their terror tells!" Several times I set the Samuel Jenner line of inquiry aside to concentrate on other branches of the family, only to come back to it a week or two later out of my compulsive resolve not to let it to get the better of me. It was maddening in the extreme, because it seemed so simple and straightforward on the surface, but was proving so difficult and convoluted in actuality.

But it was this very process that truly developed my understanding of genealogy. It revealed the patterns and traps into which so many erstwhile genealogists fall, as well as the reward that ultimately awaits those who remain steadfast and determined. And in the process it sealed my fate, dooming me to a fascination with genealogy.

Stephen Jenner was the son of Samuel Jenner II (1703 - 1767), who was the son of Samuel Jenner I (c. 1650 - 1738) , who was our immigrant Jenner ancestor. It would actually take several more months -- a topic for a separate entry that I will entitle "Who's Yo' Daddy?" -- to determine who the real parents of Samuel Jenner I were, and confirm that he and his mother (still another Hannah, for Pete's sake!) were the original immigrant Jenners in our family. But the mystery of the Samuels themselves was now solved, at last. In solving that mystery, I learned several valuable genealogical lessons: