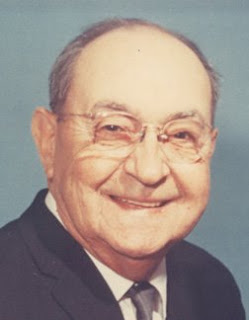 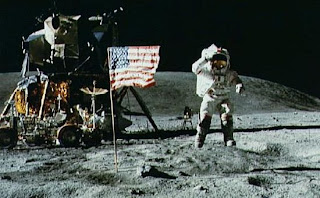 Today marks the 40th anniversary of the Apollo 11 moon landing, and the media are inundating us with images, reflections, and analysis of the historic event. Neil Armstrong, Buzz Aldren, Michael Collins, Walter Cronkite, and John F. Kennedy are being celebrated for their roles in this world-changing event -- as they should be. But my most vivid recollections of the Apollo landing will always be of my grandfather, John Guss Pellman.

My parents traveled a lot when I was young, so I spent a lot of time at my grandparents' house at 4204 Ingalls Street in the Mission Hills district of San Diego. If I remember correctly, the house was actually ordered from the Sears & Roebuck catalog and built in 1924. It's been almost 40 years since I was last in that house, but I can vividly recall every detail of it, down to the pictures on the walls, the curtains, the nick-nacks, and even the smells. That's where I was on July 20, 1969 when Apollo 11 touched down -- sitting on my grandparents' brown hide-a-bed sofa watching it all unfold on TV with Walter Cronkite providing the commentary.

It was probably soon after Neil Armstrong uttered his immortal statement, "That's one small step for a man; one giant leap for mankind," that I turned away from the TV and exclaimed, "Isn't that cool, Granddad?"

To this day, I remember the sensation I felt. It was like a mild electric shock that ran down both of my arms. There were tears in my grandfather's eyes. It was the first and only time I had ever seen him cry! And I couldn't understand why he would be crying when the whole world around him was rejoicing.

"Now I've seen it all," he said softly, gazing in awe at the TV. I must have looked puzzled by his remark, because he explained it something like this: "When your Grandma and I were married, most people were still using horse-and-buggies. There was no radio or TV, and airplanes were still experimental. Not many people had telephones, so we heard about most things from newspapers, letters, or over the neighbor's fence. And now -- in my lifetime -- they've sent a man to the moon with a TV camera so I can actually watch it happen. I've seen everything!"

I didn't truly understand the import of his remarks then. It was only after I began studying technology and social change during my PhD program that I began to sense the enormity of the change he had experienced and why it had affected him so deeply that day.

Granddad was born on August 15, 1891 in Farley, Missouri. Farley was nicknamed "Schimmel Town" because the Schimmels were such a large proportion of the town's population, which is still only about 250 people. His parents were George Frederick Pellman and Mary Victoria Schimmel. His childhood home had no running water or indoor plumbing, no electricity or gas, no furnace or air conditioning, no refrigerator -- not even a fan! Other than the house being a little more weather-tight and having a cast-iron stove for cooking, and buggies and wagons having improved seats and suspensions, most technologies used in his everyday life were not that much different that those of the Middle Ages! The major technological advances at the time of his birth -- railroads, steamships, mechanized harvesting equipment, and the telegraph -- were not a part of his daily life.

After spending his first ten years in Farley, the family moved to Kaw City, Oklahoma Territory, where his grandfather had settled after trying to stake a claim during the Cherokee Strip Land Run of 1893. While his father was sheriff of Kay County, young John and his brothers spent much of their time on the Kaw Reservation, playing with the children of the Kansa tribe. He once remarked, "When we played cowboys and Injuns, we had real Injuns. The only problem was the Injuns always won!" Washungah, the last chief of the Kansa Nation, appears to have been like an uncle to Granddad and he always spoke of him with great respect and affection.

When Oklahoma achieved statehood in 1907, the family moved to Leavenworth, Kansas, where Granddad remained until the outbreak of World War I. He spent those years working a variety of trades including barber and blacksmith. As automobiles grew in popularity, Granddad made the transition from blacksmith to automotive mechanic. He returned from serving in the War, married Vivian Grace Jenner in 1919 and moved to San Diego, California shortly after the birth of my father, John A. Pellman, to take a job as service manager for the Paige (a brand that later became part of General Motors) Agency in San Diego. He showed up for work with just a screwdriver and pliers in his hip pocket. "If you can repair cars with just a screwdriver and pair of pliers," the owner remarked, "You must be one heck of a mechanic!"

Paige was acquired by the Graham brothers in 1927, but the company did not survive the Great Depression and Granddad found himself unemployed in the early 1930s. Nevertheless, he continued to hone his skills as a mechanic and adapt to new technologies. When the government began rationing gasoline during the Second World War, his son Robert C. Pellman converted the family car to run on butane, so they could trade their rationing coupons for other essentials. Granddad continued to do the majority of his own mechanical work on increasingly complex automobiles until quite late in his life.

So, he was no stranger to technological change, nor was it something that intimidated him, as we sat there together watching the moon landing 40 years ago. His tears were simply tears of awe, as he reflected upon all that he had witnessed during his life.

I will see nothing of that magnitude in my lifetime unless we invent teleportation, fully functioning androids, or break the light-speed barrier in the next 20 years or so. I've seen computers become smaller and more powerful, airplanes become faster, appliances become more energy-efficient, phones become smaller and portable, and dozens of other adaptations and improvements of technologies that existed when I was born. But there have not been, and probably will not be, the revolutionary and life-altering technological advances that occurred during Granddad's life, which literally spanned the Horse-and-Buggy Era to the Space Age!