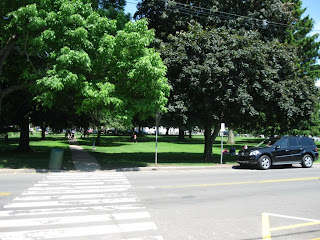 Do you remember those weird guests Jerry Spinger used to have on his show? The ones that married their own cousins and were having an affair with their in-laws? The ones that made everyone ask, "Where does he find those people?!" Well, he could have taped one of his shows in Guilford, Connecticut around 1660, and some of my ancestors would have been on it!

When my daughter and I took our genealogy road-trip this past June, we never dreamed we would stumble onto our own episode of The Jerry Springer Show. We had gathered all the information we could find in Woodbury, Connecticut, and were now working our way backward in time, following the parents and grandparents of our ancestors who had left other Connecticut colonies to found the town of Woodbury. One of these was Hannah Parmelee, my 6th great-grandmother, who had married Samuel Jenner II in Woodbury.

Most online genealogical records list Newtown, Connecticut as her place of birth. So Michaela and I had driven from Woodbury down to Newtown. At the Town Hall, we found that Hannah's father, Stephen Parmelee, is listed in Book 1 of the Newtown land records as one of its earliest settlers and landowners. But he did not arrive in Newtown until 1710, and Hannah was born in 1706. Clearly, she had been born elsewhere. Hannah's mother, Elizabeth Baldwin, had been born in Milford and her father was born in Guilford. Milford was closer to Newtown, so that was our next stop. I had to obtain credentials as a card-carrying genealogist in order to gain access to the town records in Milford -- only to return the next day and learn that Hannah had not been born there, either. So, next it was off to Guilford. And there we hit paydirt!

The people at the Guilford Town Hall directed us to the Edith B. Nettleton Historical Room at the Guilford Free Library, where the extraordinarily helpful staff went out of their way to assist us. We reviewed local and family histories, plat maps of the original township, cemetery records, and more -- including some information we never expected and weren't sure we really wanted to know.

Hannah was indeed born in Guilford in 1706. Her father, Stephen, had also been born there in 1669 -- the first of our Parmelee line born on American soil. The town began in 1639 as a plantation from the New Haven Colony. A plantation was essentially a spin-off of an existing colony. It established a separate charter and became a colony in its own right in the mid-1640s. Among its earliest settlers were John Parmelee Jr. (1612-1688), who arrived in Charlestown, Massachusetts in 1635 and was among the signers of the original Guilford Plantation Covenant on 1st June 1639. John would later marry Hannah Plaine and become the father of Stephen Parmelee, so John and Hannah are my 8th great-grandparents. This is where it starts getting weird.

When Michaela and I arrived in Guilford, we knew we had a mystery to solve about Hannah Plaine. There were several conflicting dates given for her birth and death in online genealogical records. Some showed her birth as 1594; others as 1621. Some had her dying in 1658; others in 1687. So various combinations had her lifespan as being 1594-1658, 1621-1658, and 1621-1687. Only the latter dates seemed plausible, since Stephen was born in 1669. So we had already concluded that there must have been two Hannah Plaines and that records showing John Parmelee's marriage to the older Hannah Plaine were erroneous.

Well, we were wrong!

Yes, there were two Hannah Plaines. And John Parmelee married them both! You see, William Plaine (1590-1649) was also one of the signors of the original Guilford Plantation Covenant. But it is likely that he came to America with his wife, Hannah (1594-1658) and his daughter, Hannah (1621-1687) to escape his past, because he had committed sodomy in England. Perhaps he could have gotten a fresh start in the New World and escaped prosecution for his crime, but he just couldn't keep his hands off young boys. So in 1649 he was tried and convicted of both the sodomy he had committed in England and the "corruption of youth" he had pursued in Guilford. He was hanged for his crimes on 1st June 1649 -- the first and only Guilford citizen ever executed for a crime. Yeah, weird!

John Parmelee's first wife, Rebecca, died in September 1651, when their son was but six years old, so John married the widow, Hannah Plaine later that same year. Hannah died in March 1658. Now here's where it gets really weird -- or "icky", as my daughter calls it. John married his step-daughter, Hannah Plaine, in February 1659. The two had nine children, including my 7th great-grandfather, Stephen.

Move over, Jerry Springer! My ancestors are just as weird as your guests!
Posted by Len at 10:53 AM