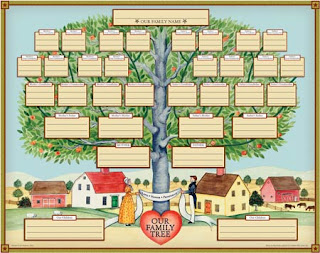 Despite my exalted status as a genuine, card-carrying genealogist, there are still many issues I wrestle with that are probably old-hat to more experienced members of the profession. One of these issues is what to call my "umpty-great" grandparents.

Things reached a surreal level of ridiculousness when I learned that I was descended from Charlemagne and tried to figure out a meaningful way to explain that there should be 38 "greats" in front of grandfather! A single exclamation point seems inadequate to describe how ludicrous that seemed to me, so I actually considered following my previous sentence with 38 exclamation points for appropriate emaphasis. One thing I knew for certain: I wasn't about to say or write "great" 38 times in front of grandfather. No way!

The Internet hasn't been a great deal of help in resolving this problem so far. On various genealogy websites -- and I have visited hundreds of them -- I have encountered numerous forms of short-hand notation for umpty-great grandparents, including (for Charlemagne):

So I'm hoping that some sagacious member of the genealogical community can give me some suggestions on satisfactorily resolving this nomenclature issue. If you have any suggestions, please leave them as comments to this blog posting.
Posted by Len at 3:28 PM